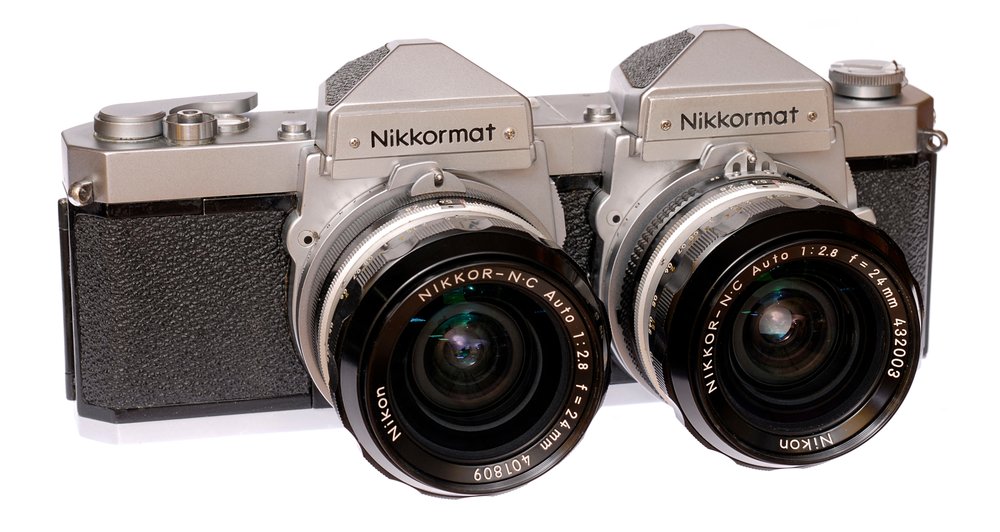 Speaking about stereo cameras it is all about the film transport. Before you even think of taking two cameras into pieces you have to make your mind up how the picture size and the distance between the two stereos have to look like afterwards. And for several reasons it is not whise to keep the original 24x36 mm.

The most important part is the film transport ("progression"). You simply have to make sure that an already exposed frame from the left film gate does not come to rest in the right film gate and thereby gets exposed a second time. One solution would be to "park" the already exposed frame in the space between the to gates. This method is called as a reference to the French stereo camera maker Jules Richard the Richard shift. A slightly modified (and perfected) version was used the the Belplasca. But this almost ideal film shift is not recommendable for stereo-conversions of two mono cameras, since it leads to an uneven film transort of three time the picture width follewd by a single width.

It is better to use the older "Colardeau progression" from the same Paris company that leads to an even film transport. Here there are TWO frames parked between the two film gates: the already exposed frame from the previous picture on the left and an unexposed frame for the right film gate for the next picture. This solution was used for many years at cameras made in (and for) the US, which lead to the expression "American format". The film transport was 10 sprocket holes leading to an not ideal upright picture format of 22x24 mm. My invention a several years ago was to enlarge this film transport to 10⅔ which leads to a perfect square format of 24x24 mm. This is possible also because of the digital postprocessing of the film so there is no bond to the positon of the perforation anymore. The resulting stereo base of 75,2 mm ("lens separation", 76 mm frame distance)) is still not too large and allows the usage of most of the lenses as well. 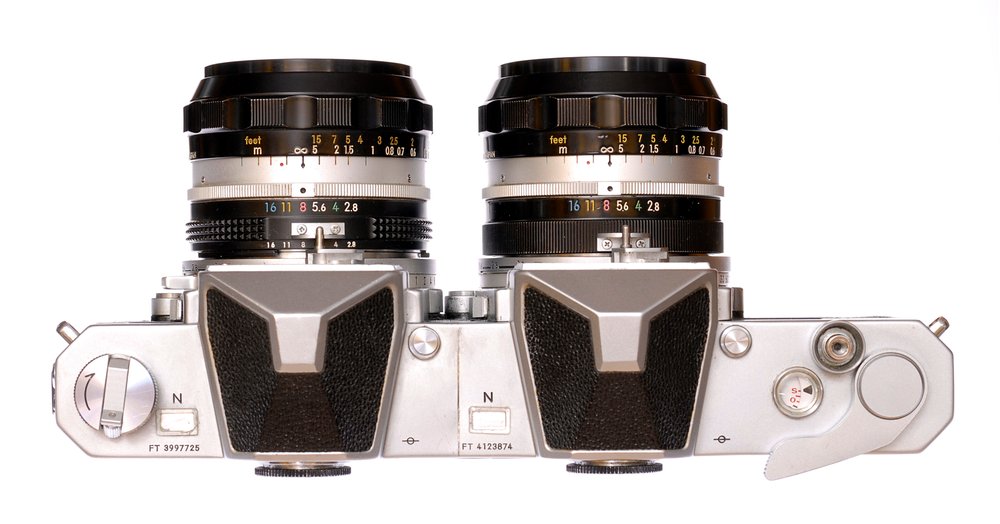 The other important advantage of the Colardeau shift is that due to the even film transport the cocking lever always is moved once so the handling of the camera does not change at all. Unfortunatelly the exposure meter didn't work at both cameras (which was the reason why I got them cheaply). But since composing of a stereo photo takes it's time there is a moment left to use a hand held meter. ;-)

As you can see just the right viewfinder eyepiece is blocked. Only the left side still contains the mirror an the pentaprism. Because the whole mechanism of the Nikkormat is constructed in quite a bulky way there was not enough space to keep both mirror mechanisms. But this is not a problem since the viewfinders are not in eye distance and that's why you can't look through both viewfinders at the same time anyway.

The biggest challange of course was the coupling of the two shutters. It was mandatory for me to use only one escapement for both shutter units to ensure absolutely synchronous release and shutter times. The video shows how I managed to achieve this. :) 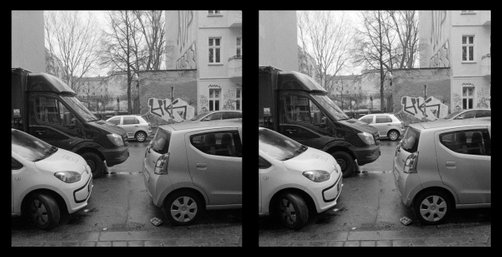 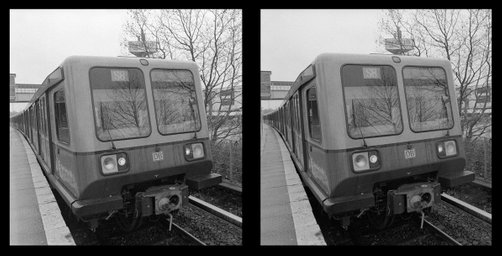 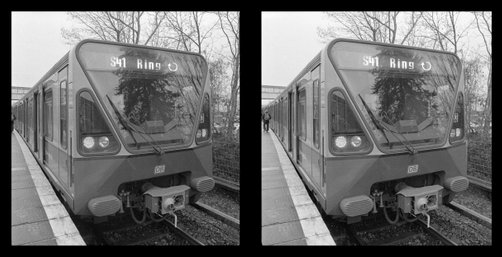 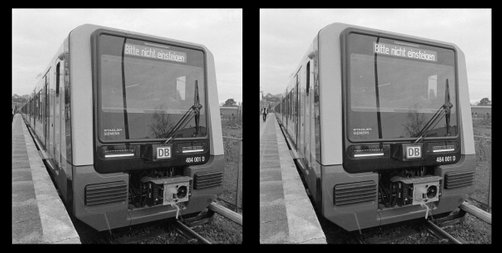 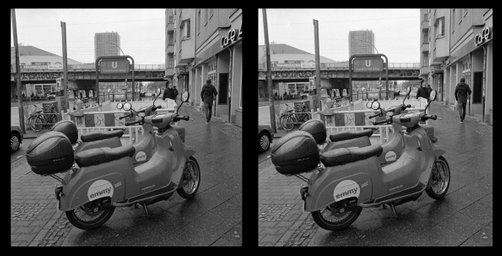 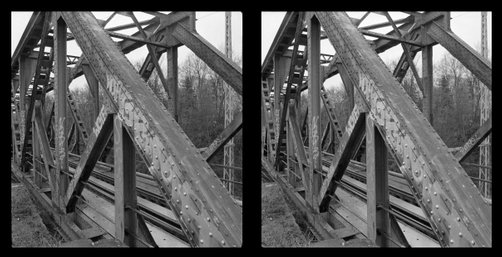 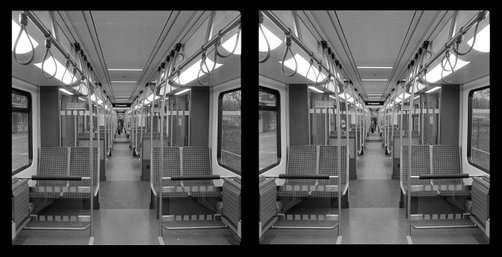 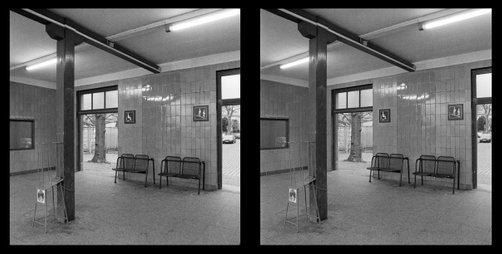 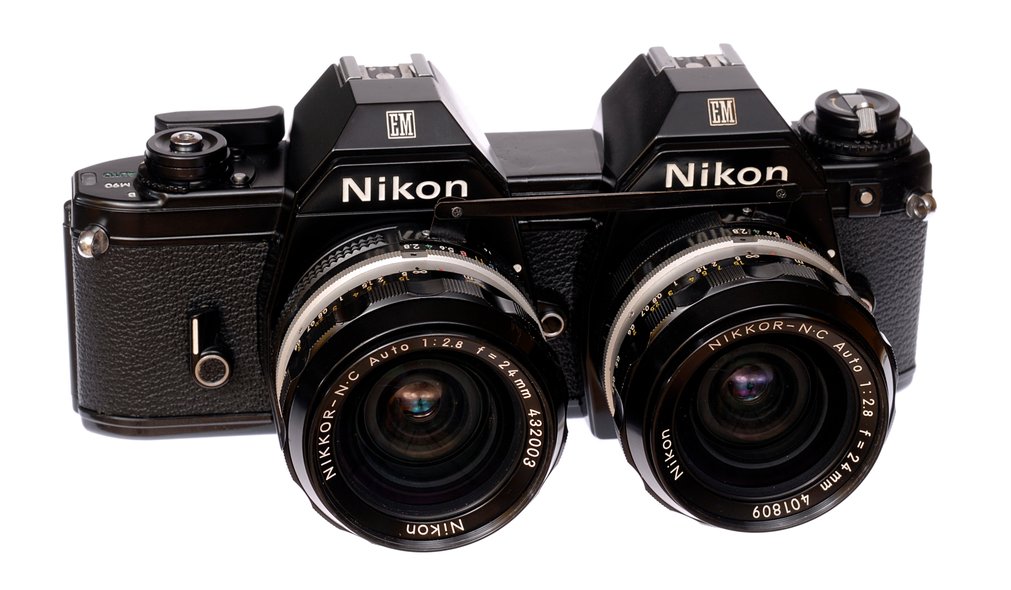 This is my personal getaway from the idle time caused by the Corona winter-lockdown 2020/21: a stereo reflex camera based on the Nikon EM. This budget SLR from the early 1980s is one of the most straightforward camera constructions ever made. It is concieved around two major centrepieces made by subcontractors: The Seiko MFC-E focal plane shutter unit and an integrated camera controlling circuit M51858 made by Toshiba. For the rest of the camera Nikon used extremely downsized standard technology but without any compromises in terms of rigidity. In contrast to low budget cameras made ten years later all parts are still made of metal and the film transport and cocking mechanism are bedded in ball bearings. 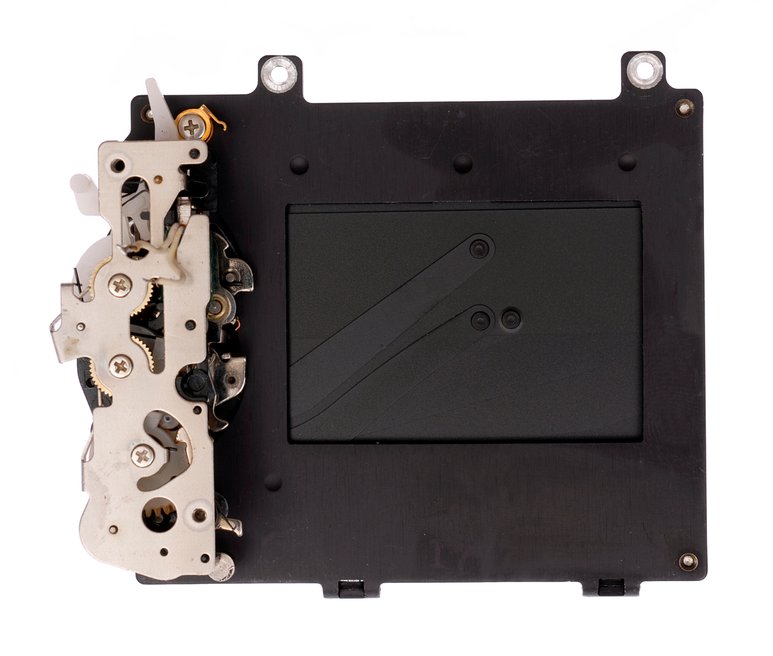 Above the Seiko MFC-E shutter. Metal Focalplane Compact with Elektomagnetical control. This shutter unit was used in many contemporary SLR cameras like the Pentax ME, Minolta XD7, Leica R4, Mamiya ZE and others. One of the Main idea of this construction was that the first curtain ("opening curtain") returns to the closing position after the second curtain has travelled across the film gate annihilating the remaining energy of the mechanism. As a result in the "fired" position of the shutter both the first and the second curtain are blocking the film gate making absolutely sure that no light can "crawl" past the metal sheets of the curtains. This made this Seiko MFC perfect for applications in viewfinder cameras, where no mirror is blocking most of the light.

With its aperture priority automatic exposure this camera makes possible to do stereo photography in a snapshot style. Aperture priority is just perfect for 3D shots since the aperture opening determins the depth of field. In three-dimensional photography you need to have control over the sharpness because everything you see in the picture has to be sharp. 3D-photography is an emulation of our natural stereoscopic vision and since our eyes are virtually scanning the whole scope in front of us it would completely destroy our habitual way of viewing if parts of the image would not be in focus. So you want to preselect the opening of the diaphragm according to the necessary depth of field and the camera forms the shutter time accordingly.

The Colardeau progression is the oldest solution for a film advancement in a stereo camera. It was invented by Louis Joseph Emmanuel Colardeau and Jules Richard in 1913 [US Patent No. 1,256,774, "Homeos"]. Originally it was based on a transport of 8 sprocket holes that resulted in a picture width of 4 holes and gave upright frames of the usual cinematography format 18x24 mm. The stereo base was just 57 mm, though. By enlarging the transport to 10 sprocket holes in the 1930s and 50s the well known American format was established. The frame now grew to 23x24 mm and the base to 71,25 mm. All these Colardeau advancements are of the even type (in contrast to the uneven Richard and Belca progression). The space between the two film gates is just large enough to "park" two pictures inbetween them: the already exposed one from the left gate on the right "parking spot" and the piece of film that will be exposed at the next shot in the right gate on the left "parking spot". My invention was to enlarge the picture size slightly to 5 ⅓ sprocket holes that give a realy square format of 24x24 mm and a stereo base of 76 mm.

Since the Nikon EM is a rather lightweight single lens reflex camera, my stereo version is lightweight as well (especially compared to the above Stereo-Nikkormat). The aluminium chassis of the EM weighs just around 70 gramms; the above chassis of the stereo EM about 100 gramms. No less it feels quite rigid. 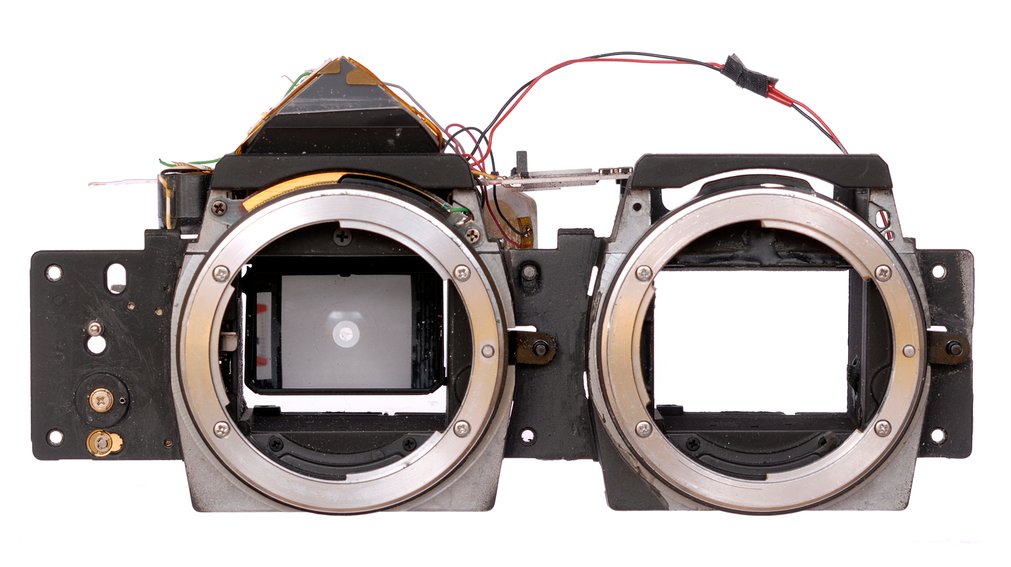 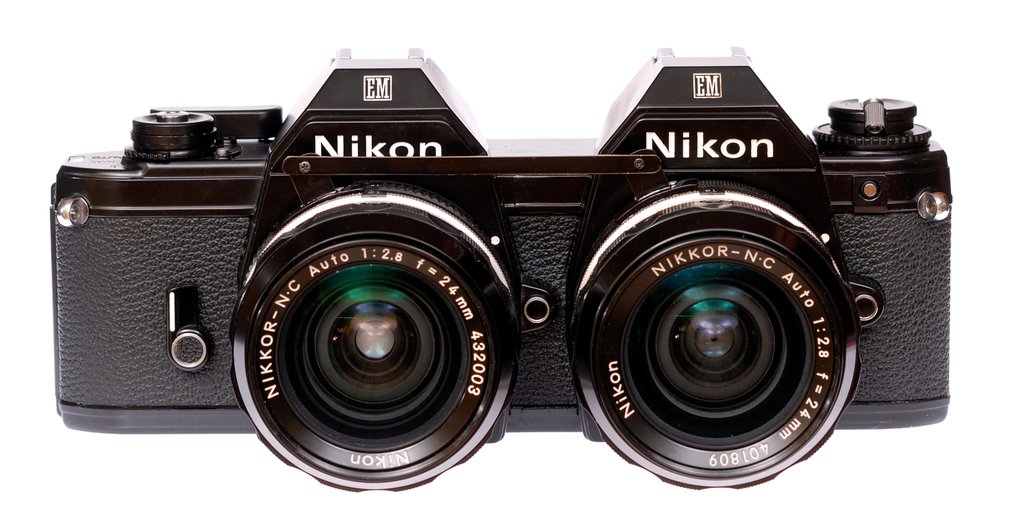 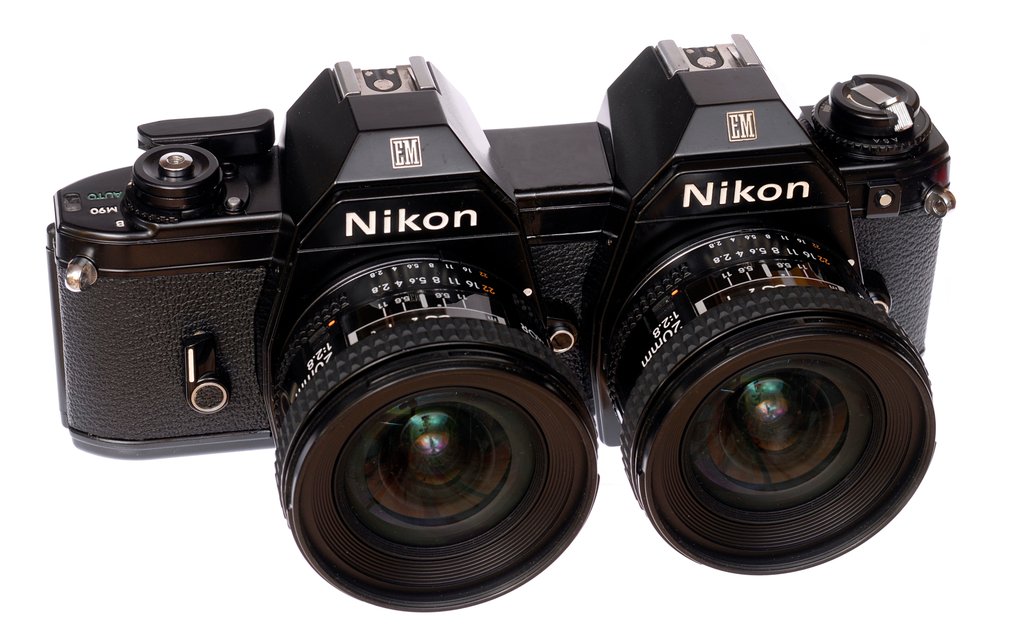 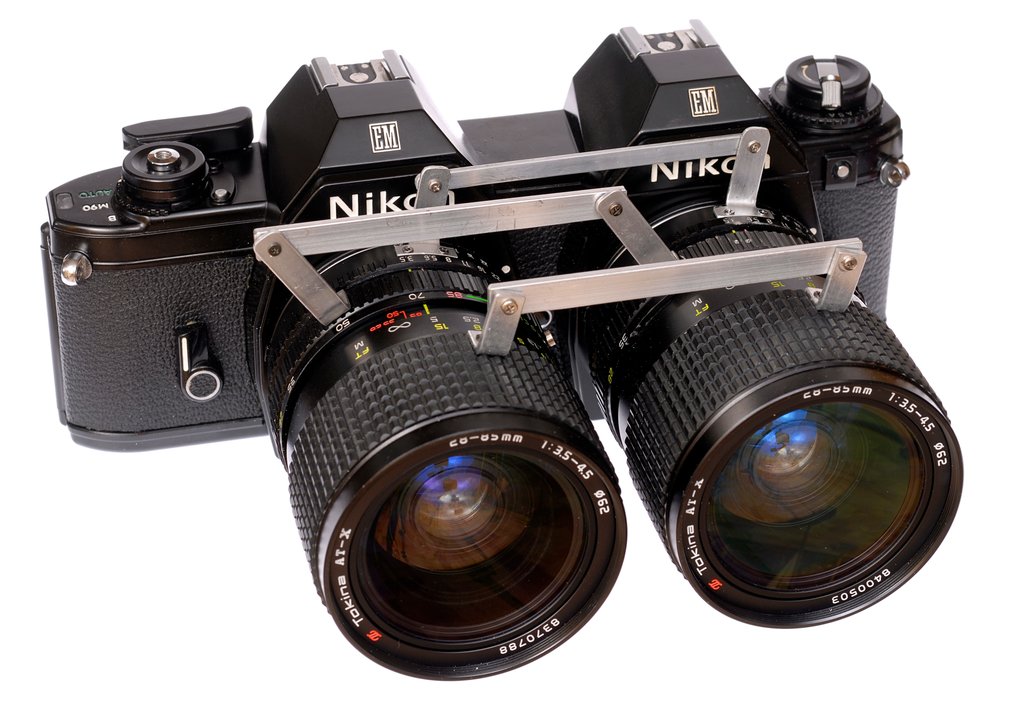 Because the zooms remain now as a permanent unit I made a special rear lens cap that keeps them together when not mounted onto the camera. 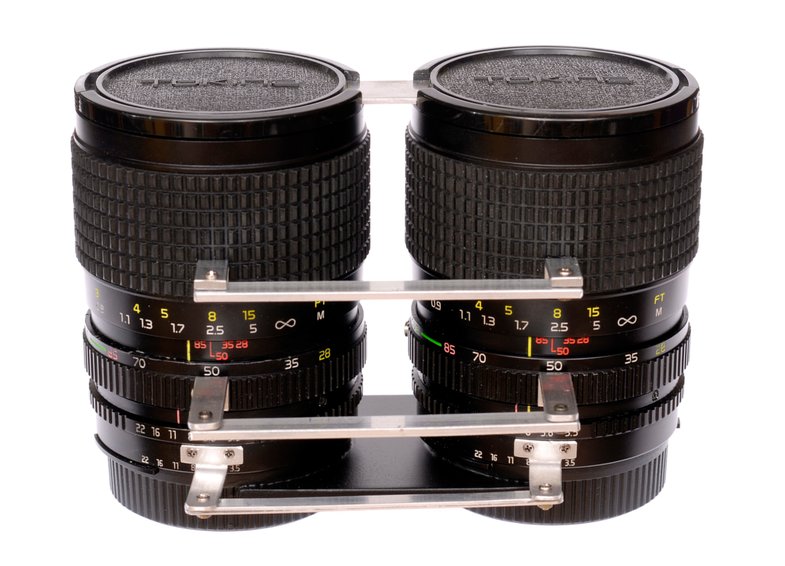 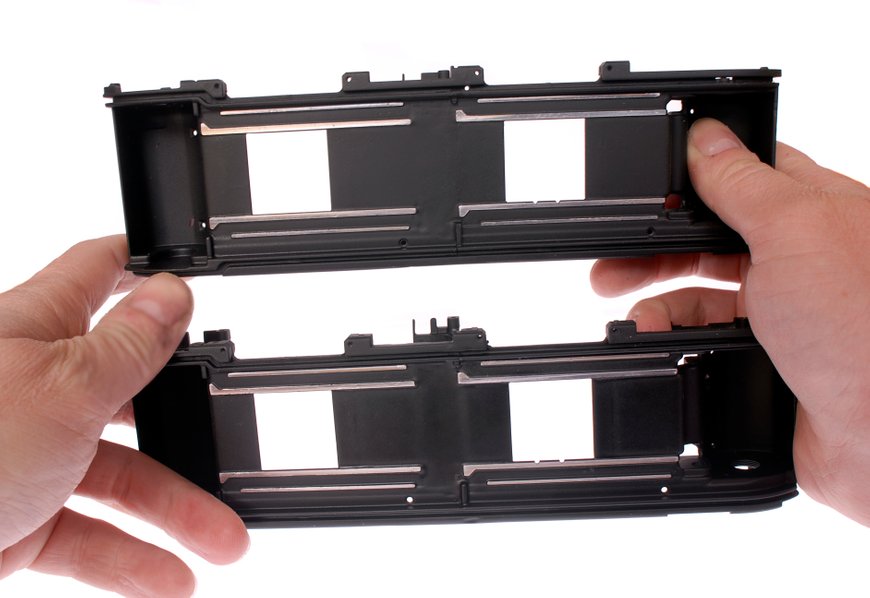 I just went into serial production... ;-) 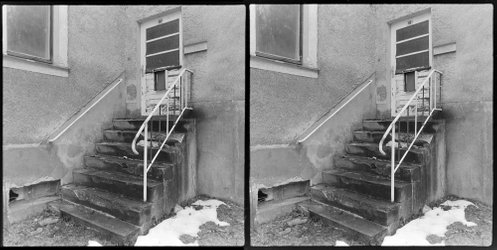 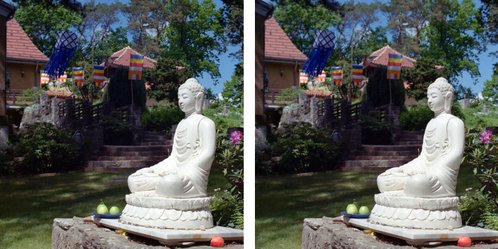 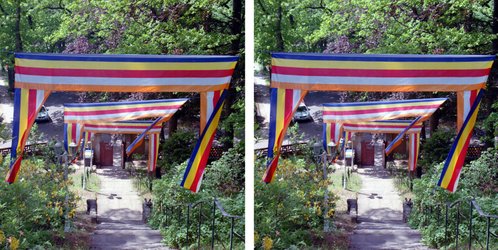 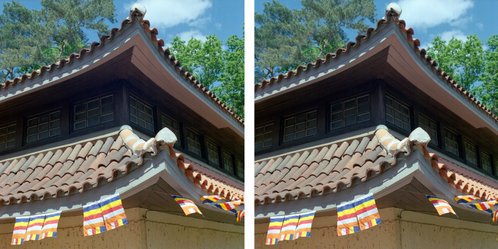