Note: I don't offer any conversions, so please don't enquire about this request, please. This website has no trading purposes. This also includes that I will not work as a payed guide for your own conversion-attempts. Thank You.

Panascope 8 was an interesting 1950s attempt to emulate the new widescreen technology for the amateur cinematographer. Offering the advantage that no special anamorphic attachment was necessary it was also entailing two major problems:

1. Since the full width of the film was exposed the filming capacity of one roll of double eight film was reduced to a half.

2. The standard processing of double eight film included its slitting. That often lead to a total destruction of the footage as a final step of the processing procedure. Especially this second problem was responsible for a failure of Panascope 8 to evolve into a common amateur wide screen system in those days. [cf. Edmonds, Guy: Amateur widescreen; in: Film History, Volume 19, p. 404, 2007.] 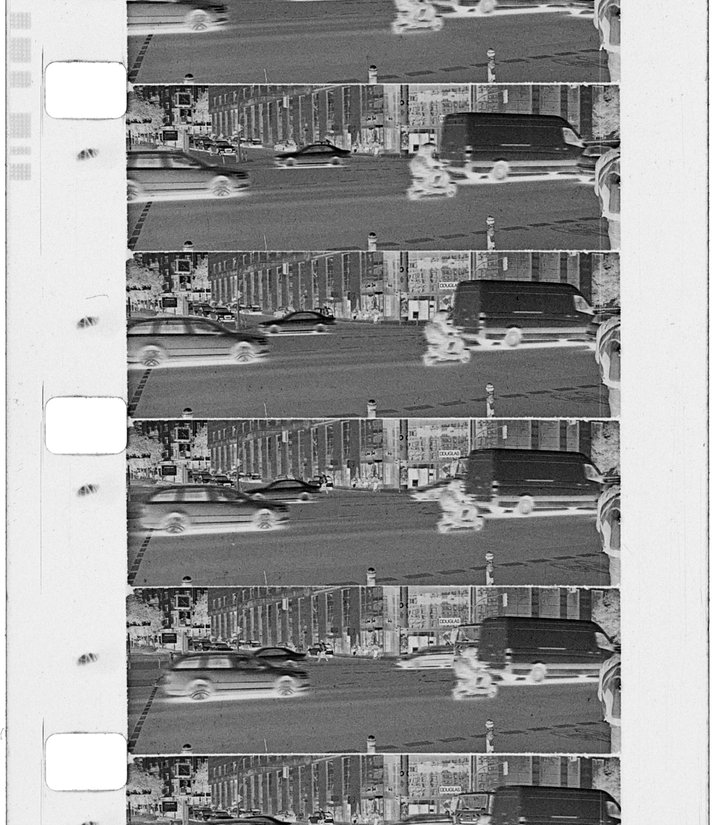 But an idea which did not seem quite reasoned in the 1960s actually intrudes itself as THE solution for a widescreen film format today. Using 16 mm film stock by that time just solved the fatal splitting problem. But it added huge technical difficulties concerning the conversion of cameras and projectors. Panascope 16 would offer the same image as Panascope 8 but without the 16mm film providing the additional perforation hole for such a picture height. This would require a very complex transport mechanism in both the camera and the projector.

But also in this respect times have changed. For decades film photography was tightly linked to projection. This was more or less the only way to watch the recording. Nowadays motion picture film gets digitized. And since modern telecine machines are not bound to any sprocket hole the second aspect that used to make Panascope 16 unreasonable has totally vanished. Contrary to that a Panascope 16 camera would open an access to all available film stock for an amateur widescreen film format:  Colour or black and white, negative or reversal material, different film sensitivities, and so on. And in contrast to what was said about Panascope 8 above Panascope 16 would not halve the capacity of a roll of double eight film but double the capacity of a role of 16 mm film. 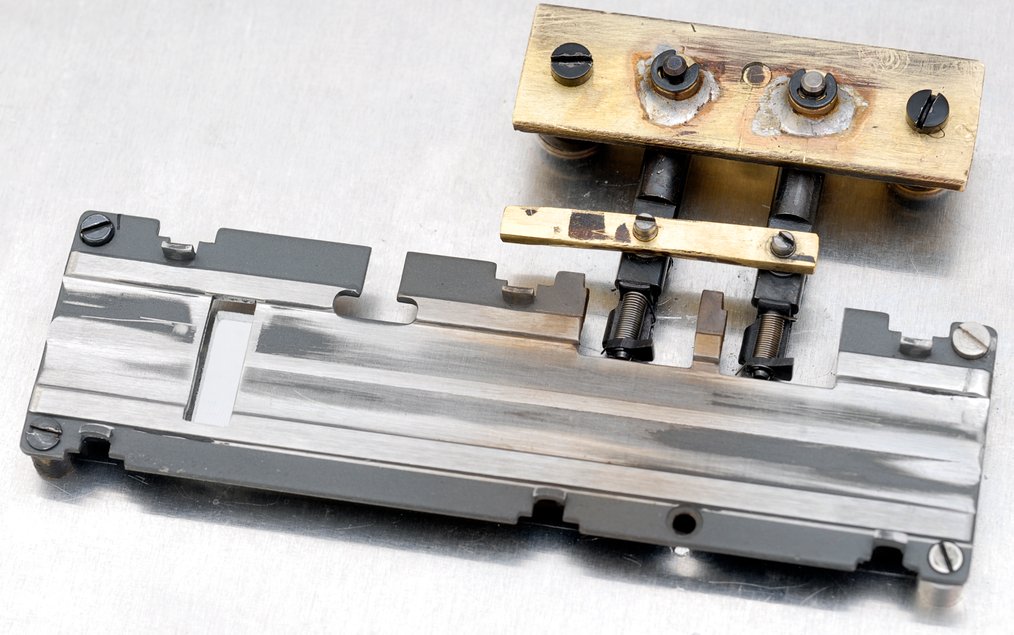 The distance of two corresponding edges of the sprocket holes of double eight film is 3.81 mm. Since the distance of the sprocket holes at 16 mm film is 7.62 mm there has to be a special film transport to get half the height of the normal 16 mm picture. To get a clear view on this technical issue I made the above model of how I thought an intermittent movement for a Panascope 16 camera might work. The only solution I could think of are two claws of the simple oscillating type (the German expression is Schleppgreifer). In contrast to elaborate D-curve claw intermittent mechanisms that are also used in projectors the simple oscillating claw works in form of a ratchet. A spring loaded edge snaps into the sprocket hole and moves the film until it turns into the other direction and disengages its connection to the film. On the backward movement the spring loaded edge simply slides on the film surface between the sprocket holes. This is the reason why this principle can’t be used in projectors as the film would be damaged after a few screenings. This problem does not apply with cameras of course. The whole idea is to have two claws in a distance of the sprocket hole interval of double eight film or in a distance which is an uneven multiple of this interval. If the two claws are 3.81 millimetres away from each other they will work on the same sprocket hole, when they are further away they will work on different sprocket holes.

Converting a camera to feature this Panascope 16 film format is not easy. Identical to Panascope 8 there are two possibilities: Using an existing 16 mm camera seems to be logic but causes a lot of troubles. Not only that you have to install a second claw but also the film transport by the sprocket wheels has to be reduced by a half. This requires an immense intervention into the gear mechanism of the camera. The other way would be to convert a double eight camera. This would have the advantage that most of these cameras do not have sprocket wheels so there is no change necessary at this point. On the other hand a massive intervention has to be carried out to install a mount for 16 mm lenses. So both ways have their huge disadvantages. 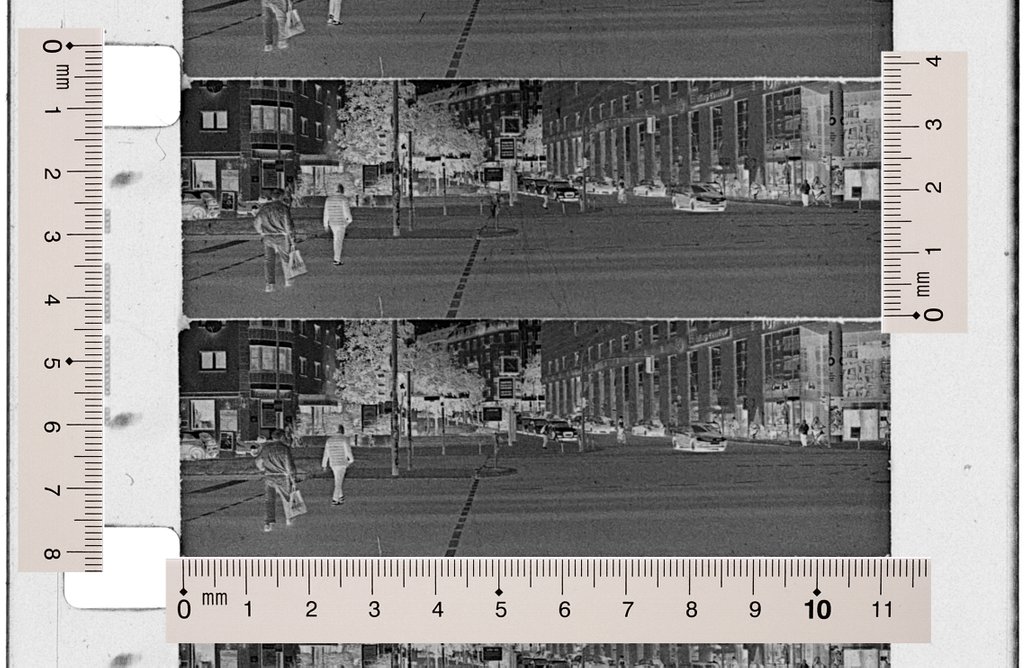 After two weeks of adjustment work I managed to get absolutely even spaces between the frames (constant frame lines). This is essential for a steady picture. The calibrated millimetre scale shows the distance of the sprocket holes (7.62 mm), the width of the frame (11.1 mm) and the height of the frame (3.7 mm)

Just a few words on the panoramic format. The usable picture size is 3.7 by 11.1 millimetres. This gives an aspect ratio of exactly 1:3.0. Some of you might say why not widening the gate a bit further into the sound track? First I don't think that an even wider picture would look good and second at a certain point it would be necessary to recenter the lens. And this is a work I would not like to do on purpose. A third reason for ristricting myself to this frame size is that it still allows using c-mount lenses that are conceived for a 2/3 inch sensor size. It is possible to get focal lengths of 8 or even 6 mm for affordable prices.

After a friend of mine gave me some Bolex spare parts I had the chance to experiment a bit with this type of camera. I really managed to convert the transport mechanism of such a Bolex to feature Panascope 16. The steadiness of the picture is as good as with the usual Bolex. Since my camera is not a Reflex model it allows using many C-mount lenses; even some types made for CCTV cameras. 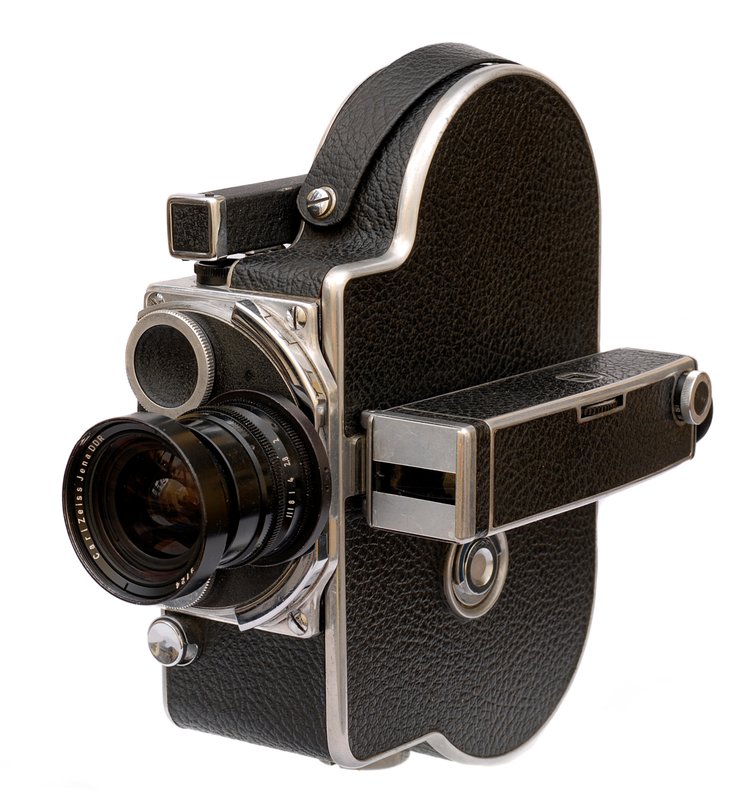 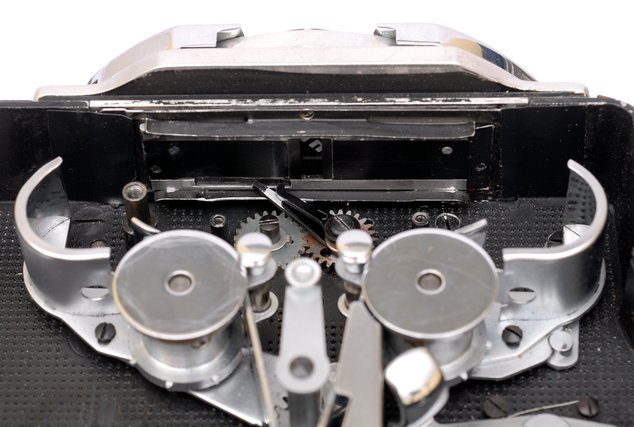 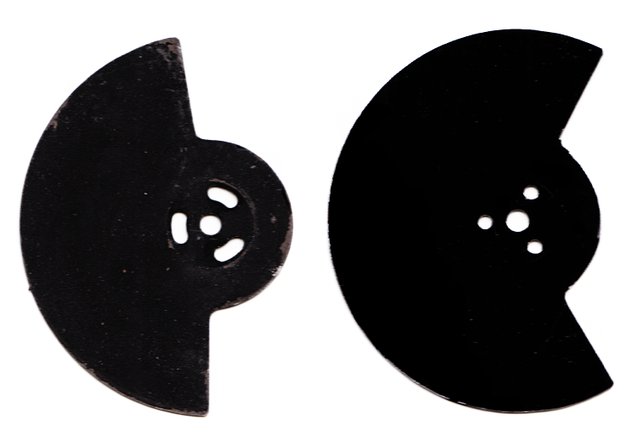 I decided to make a new shutter blade with a smaller opening of 120 degrees instead of the original 190 degrees. 120 degrees means that you have to multiply the frame rate by 3 to get the exposure time. So 18 frames per second give a 1/54 of a second (≈ 1/60 s) shutter time. This results in sharper images because of less camera shake. Second the camera is better adapted to today's highly light sensitive films – the lowest ISO of colour film is 50 ASA/18 DIN, which would have been rated highly sensitive when this Bolex was made in the late 1950s. In full sunlight and at 18 fps you don't have to stop down more than f/11 with such a film. Stopping down further increases the danger of diffraction short focal length are prone to. 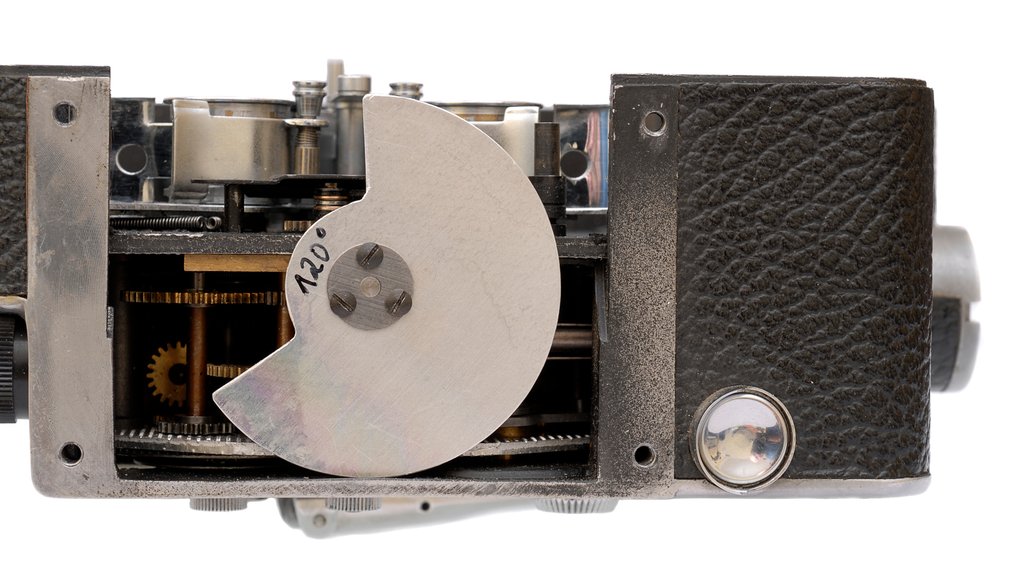 Now I have to build myself a scanner for this special film format. I will use the transport mechanism I made for the initial testing of this principle. Here is an update showing the current intermediate stage. 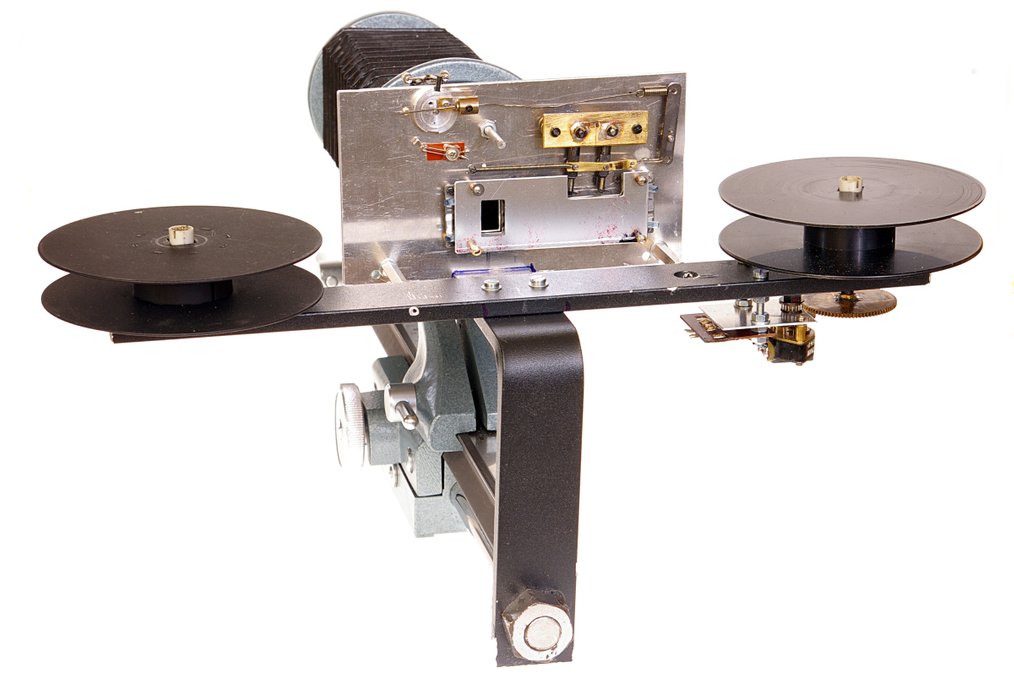 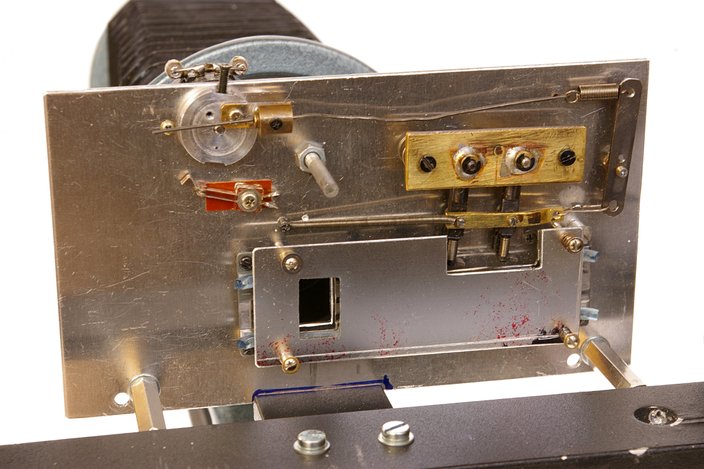 The scanner is finished now. It just needs a more precise adjustment of the two claws for better stability of the two frames within the (usal) frame of 16 mm. Beyond that I made an universal power supply that can be used for upcoming scanners. ;)